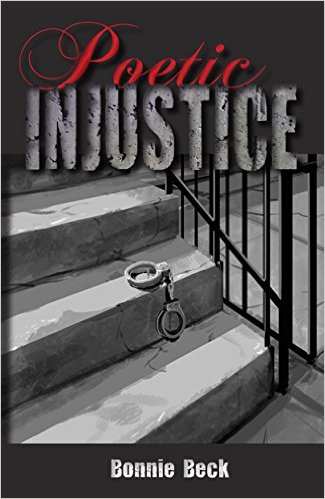 The female cop has held a media mystique from the days of pioneering glamazon Angie Dickenson’s Police Woman to The Killing’s austere Sarah Linder and cop-next-door Ellie Miller in Broadchurch.  Such danger and heartache! What inspires that career path in real life?

Here, a view from my cousin Bonnie Beck (Cpl, Burlington VT Police Dept), who shares a range of emotion and experience in her newly-published book Poetic Injustice.  Growing up, you could see her introspective, creative side.  A future in police work?  I would not have predicted. But, then there is the death aspect……

Q.  You grew up in the funeral business.  When did you see your first dead body?

A.  I remember as a young child traipsing down the steps to the room where the body was laid out for viewing. I watched my dad apply makeup to the corpse in the casket. He had a black leather case full of lots of plastic containers of powders and makeup. He was very talented at making the dead person look, well, sort of not dead.

Q. Flash forward.  You’re now a cop.  When did you see your first dead body?

A.  It was a man who hung himself in his garage.  He definitely looked dead.  The next week it was a man who shot himself in a car.  Lots of blood.  I learned from my funeral home upbringing that a dead body is just a shell.  Their personality…their soul is no longer there. So, it is much easier now in my work to deal with dead bodies.  But the hard part is delivering a death notification to a family member.

Q.  Have you ever shot or killed anyone?

A.  No. Cover and backup are my best friends. I do love my taser, but have not deployed it in the field. Every time I take it out of holster the bad guy complies immediately!

Q. Any particular challenges being a female cop with a beat vs. a male cop?

A.  I am very fortunate to work in a department where both male and female officers are loyal to each other. The generation of younger cops is more accepting of women in a male-dominated profession. When I first started, an old school guy told me straight up that he did not like women in the profession.  He felt that it was a tree house occupied by the most macho of men and females made it look like it wasn’t that difficult.

Q.  How do you manage the stress and danger?

A.  It’s a challenge.  You know every call is not going to be good — and sometimes worse than initially dispatched. I once had to accompany a guy to retrieve his belongings from a girlfriend who was granted a restraining order.  She greeted us — wielding a knife!  A new domestic charge ensued. It is an effort to take care of oneself; burnout is inevitable if you don’t.  Having a supportive spouse helps.

Q.  For those in other corporate and professional realms, we get into “the Zone” — very big initiatives.  But for us, there is a controllable completion date.  You know you are going to make the deadline and it is usually in view.  How is this different from the cop world?

A.  We live in a zone working cases that involve tracking down suspects and witnesses, compiling evidence and writing affidavits of probable cause for court. The difficult part is we have many cases to complete all at once and have deadlines for court paperwork to be filed, bad guys to find, victims to interview. There is never enough time. And this is a paramilitary organization with chain of command and pressures from above.

Q.  What influenced you to stake a career in law enforcement?

A.  Hearing the sound of my dad’s ambulance making a run at all hours, or the secret black phone with no dial numbers that was connected with the fire department and which all funeral homes had. So, when there was a fire the person would call the fire number and it would ring in our home as someone was ALWAYS there. My parents would answer then press a button behind the curtain which caused the fire whistle to blow in town and then my parents would relay the info to the volunteer firemen.   It was a 24/7 business that involved the safety of our community. Also…as a student teacher in Raleigh, NC I found myself in a 4th grade classroom feeling much like a cop. At the time a local department was recruiting women, so I went for the testing on a fluke and did well.  My children in grade school had a female DARE officer whom I admired and influenced me in applying.

A.  I had proven survival skills — having experienced a difficult divorce, raising two kids on my own and being a competitive runner and cyclist.

Q.  How do you handle the rigor of the job — dealing with the underbelly and those who inhabit the dark side?

A.  I treat people with respect and am able to walk in their shoes often having experienced tough times in my own life. Golden rule is what it is all about.

Q.  Do you have to be tough all the time?

A.  I was involved in the investigation of the homicide of a young college student and had to escort the parents to the detective unit after we found her body. On the way down the hall I could not hold back my tears. That brave father put his arm around me in comfort.  I will never forget that.