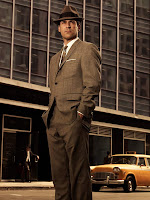 Don Draper, the dashing lead character in the television series Mad Men, is a master in the art of re-invention. His story is taken to the extreme, as he architected his ascent from humble beginnings to the top of Madison Avenue in the 1960s.

What can be learned from Don’s skills and strategies?

Here’s an analysis — from my perch as talent advisor and former ad agency VP:

But it wasn’t enough for Don. Or was it too much? Maybe more than he deserved?