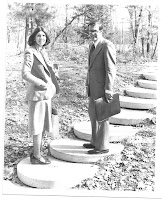 copyright Nancy Keene 1977
How nice are you when you don’t have to be?
Anyone involved with the ego of public figures and CEOs has likely been on the receiving end of a scream-a-thon or PBO — polite brush-off –depending on the day or mood.When Donald Rumsfeld published his memoir, Known and Unknown, politicians and media types weighed in with their own personal accounts of eruptions and slights.

Here’s a post from Katie Couric’s blog, written by veteran CBS News Correspondent David Martin, who covered the Pentagon for decades. An excerpt:

One of his close aides once jokingly referred to him as “a freak of nature.” He can be irresistibly charming and stunningly rude.  Once when the former Director of Homeland Security Tom Ridge was ushered into the Defense Secretary’s office, Rumsfeld left him to stand in silence while he finished reading whatever document he had before him.

But flash back to Rumsfeld.

I was a young, PR plebe in Midland Mich., handling media and logisics for his speech at a local business luncheon. It was a month or so after the Carter inauguration and Rumsfeld was newly the former Secretary of Defense.

Rumsfeld’s reputation as a stern taskmaster had filtered to Midland — complete with insider anecdotes by way of Grand Rapids, hometown of Gerald Ford, the president he served. All in all, a bit daunting.  Very important to be organized and prepared.

Midland is a pocket of influence, the corporate headquarters of Dow Chemical.  But the Executive 100 audience was not the magnitude of, say, the Detroit Economic Club, a priority whistle stop for any politician or business leader in that era.

He could have done a perfunctory drop-in just to earn the speaker bureau fee, but Rumsfeld graciously and sincerely accommodated every request proffered.  He agreed to an off-the-record, no-press-admitted speech — to preserve the aura of exclusivity of the luncheon forum — plus Q&A; with the audience.  He participated in a separate press conference with the local Midland/Bay City/Saginaw print and broadcast media.  He attended a private dinner with local leaders the night before his talk.  He was only contractually bound to do a 30-minute speech.

He flew commercial into the local airport.  Very unassuming in the terminal, but with the spit-and-polish patina of power — and a huge dose of suave.  It was definitely the irresistably charming side described in the CBS blog.  More Don Draper-esque than you would believe.

He peppered me with questions on the way into town.  Sought insights on local color and perspective of the luncheon audience.  And, of course, wanted to know the moment-by-moment timetable prepared for him.   I reviewed it line-by-line, ending with the return drop-off at the airport, where a private plane would take him to Detroit so he could connect with a commercial flight home.

I promised to complete his itinerary by a certain time, as I was driving to Detroit to catch up with other locals for a function at the Adcrafter Club.

C’mon down on my flight, he invited.  They can just add you to the manifest and drop you off.  Perfect.

So, politics aside, this was a small slice of Rumsfeld in his post-Ford career phase.  He delivered a high level of value to multiple audiences — with excellent content and smooth delivery.  He was compelling, knowledge-packed, candid and respectful.  A world player on someone’s local turf.  Plus, he was polite and proper, with prompt thank you notes of acknowledgement on makeshift notecards from his transition office before becoming CEO of G.D. Searle.  What a nice guy, one would say.

All this and a private plane at his disposal — which he was willing to share.  On that day, Rummy could have extracted a swoon from Maureen Dowd herself. 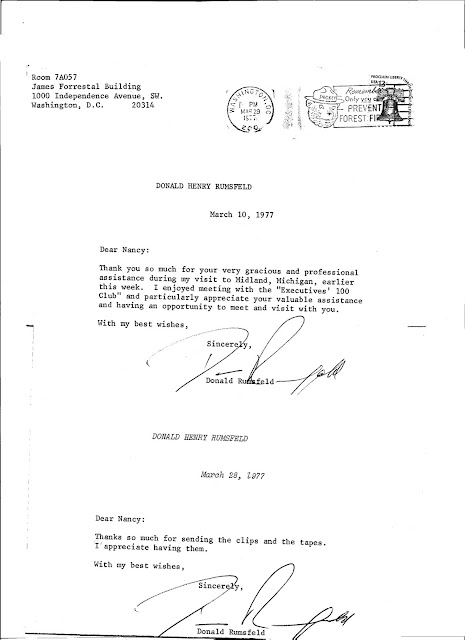