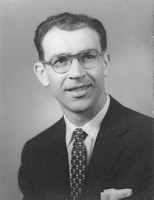 What we learn in early childhood shows up in adulthood.  Sometimes it’s a glimmer of a memory.  But it’s there.

In a career of active industry involvement, I’ve never served as president of an organization.

Instead, I LOVE doing the meetings and programs.  Picking a timely topic.  Recruiting speakers and panelists.  Moderating.  Generating buzz and participation.  Being a presenter.

Where did this come from?

Recently, I spent an evening on a research project scoping on-line archives of the Altoona Mirror, our hometown newspaper.   There it was in black and white!

“…Dale Carnegie Class No. 301 deviated from the normal trend of study” and hosted a special event. It was …”a demonstration of the accomplishments of the public speaking class.”  My father was:  Committee chairman.

A major undertaking was the expansion of Park Hills Golf Club to 18 holes and construction of a new clubhouse.  He was a director and committee member.  There was a whole series of announcements and events, culminating in the dedication.

He solicited letters from Arnold Palmer and other greats who played at the club in various exhibition matches.  Commendations from political figures.  There was a moment-to-moment account of the entire opening convocation in the newspaper.  The leadership team was photographed.  My father was:  Toastmaster.

There were other golf events he oversaw.  The Hacker’s Handicap.  The Carlie’s Open, which possibly pioneered the trend of title sponsorships, as Carlie was a tavern proprietor (Johnson’s Cafe).  There were videos and elaborate programs.  Even a tournament queen.  (It might have been Carlie himself dressed as Miss Pennsylvania.)

When the Vatican allowed laypeople to participate in the liturgy, Frank became a lector at what was known as the Golfer’s Mass at St. Rose of Lima.  7 a.m.  No sermon.  He and the monsignor kept the service moving.  You could make an early tee time.

That love of content, packaging and showmanship trickled down.  Frank had a flair, for sure!

In memory and gratitude on Father’s Day.